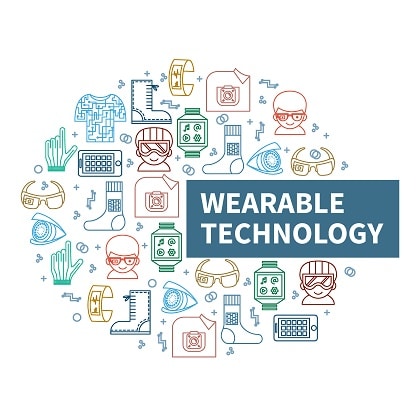 The concept of wearable technology is nothing new. The first watch, which was worn around the neck, was actually invented way back in 1500. In the 1600s pocket watches came into fashion and by the end of the century the first wristwatches were being worn, predominantly as bracelets by women. As wristwatches became smaller and more precise their popularity grew.

We had to wait until the early 2000s for wearable technology as we know it today. In 2009, Fitbit set pulses racing with their wearable activity tracking devices, initially clip on devices and then wristbands. The first smartwatches launched a few years later, one of the first being the Samsung Galaxy Gear (September 2013), with the Apple Watch debuting in April 2015.

And whilst a lot of wearable technology to date could be deemed to be nice-to-have luxury items, uses for smart technology in healthcare are growing. Innovations to date include high-tech bandages that could monitor healing, a wireless, wearable ECG sensor for detecting early heart arrhythmias, and a tight-fitting shirt with sensors to monitor heart rates for early cardiovascular disease detection.

Grand View Research estimates the global wearable sensor market will grow by 39% by 2025, with Statista reporting that by 2022 around 361 million people will be using some form of wearable technology.

Smartwatches and wristbands account for around 95% of all wearables shipped in 2018, according to IDC, and will continue to dominate the wearable technology market for the foreseeable future, although significant growth is expected in other segments.

Statista’s report shows that the earwear segment is set to experience the greatest growth (486%) between now and 2022, followed by clothing (262%) and then smartwatch (67%).

Grow in the wearables sector promises to be exciting, not only in terms of new product development, but the data generated by such devices and how it can be used.

Choosing the right data storage (memory) for your smart device is important. Size, performance, capacity, operating conditions, are just some of the factors that need to be considered by manufacturers.

You can take the stress out of securing the right memory solution for your application by contacting Cardwave Services. We have over 10 years experience in the flash memory sector and are deemed to be a leader in our field. We pride ourselves in working collaboratively with customers and flash manufacturers, to offer end-to-end solutions that meet your business requirements.