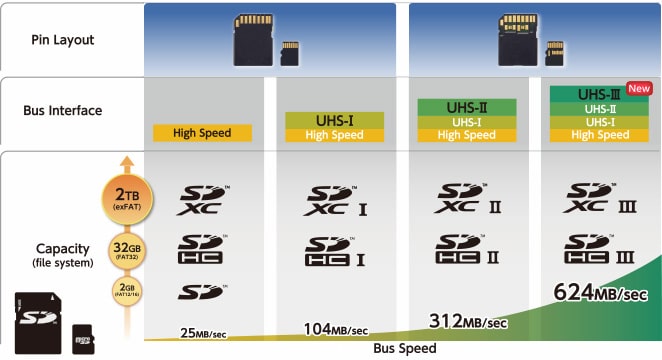 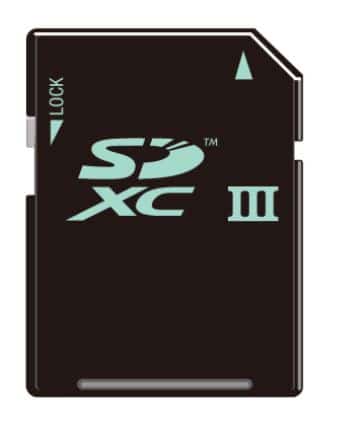 UHS Bus Interface
The UHS-III high-speed interface signals are assigned to the second row of SD memory card pins introduced with UHS-II. This newest bus transfer speed option will be available in full-size SDHC and SDXC cards, as well as microSDHC and microSDXC cards. It does not change the physical size or shape of the cards as the move from UHS-II to UHS-III involves only a PHY change, allowing relatively easy and fast upgrades of existing UHS-II products to UHS-III.
Both UHS-I and UHS-II make the robust storage specified for SDHC and SDXC manageable and even more portable. Ultra High Speed was announced in June 2010 with UHS-I delivering top bus-interface speeds of 104 MB/sec, which was tripled to 312 MB/sec in UHS-II. UHS bus interfaces are backwards compatible and are exclusive to SDXC and SDHC products. All UHS-equipped memory cards achieve greatest performance when paired with corresponding UHS devices. SDXC and SDHC UHS-I and UHS-II products are already in retail outlets around the world and supported by leading camera manufacturers.

If you are looking to use flash, Cardwave can assist in recommending the right product that will be most suitable for your requirements. Cardwave is independent but has direct accounts and strategic partnerships in place with many of the world’s top manufacturers.

Multi-award-winning company Cardwave, which has offices in Devizes, Wiltshire and Dallas, Texas works with customers of all sizes across the world, providing specialist expertise to organisations who need to secure and distribute their data on removable and embedded media. The business provides value-add services, end-to-end project management, and consultancy solutions, and has positioned itself as one of the market leaders.